Identificarse/Registrarse  Suscribirse
Offices
This news article was originally written in Spanish. It has been automatically translated for your convenience. Reasonable efforts have been made to provide an accurate translation, however, no automated translation is perfect nor is it intended to replace a human translator. The original article in Spanish can be viewed at Inaugurada la nueva sede del parque TecnoCampus de Mataró (Barcelona)

Inaugurated the new headquarters of the Park TecnoCampus of Mataró (Barcelona)

The Minister of science and innovation, Cristina Garmendia, along with the Mayor of Mataró (Barcelona), Joan Antoni Baron, and the President of the Fundación tecnocampus mataró-maresme, Alicia Romero, inaugurated the new headquarters of the Science Park and innovation at the beginning of November. The facilities, designed by the architect Oriol Bohigas, and the team of MBM architects, have made an investment of EUR 52 million. 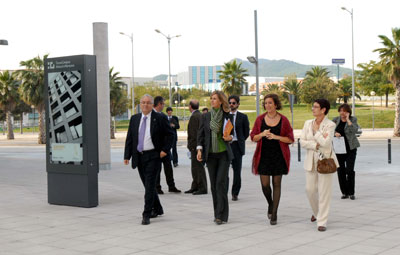 Time of the visit of the Minister, Garmendia, on the opening day.

Since the February 2007 placed the first stone of the Park, the works of the new headquarters have made progress in parallel to the consolidation of the foundations of the project. Thus, during this time period opened the temporary headquarters of the Park, in the Vallveric building (TCM1.0) while the two university schools that already existed in the city (EUM and EUPMT) were integrated to the Foundation, for the management of the Park. In the campus has been launched a new Centre (the school Superior of the health sciences) and the project of the pre-incubator for talent has also been initiated to encourage the University to create a business. The College building of the Park linking these centres in the same space, complete with the transfer of the Cetemmsa technology centre to the present site of the Park.

The new headquarters of TecnoCampus Mataró-Maresme consists of two towers for support services for the creation of companies, the incubator and housed businesses, as well as a Congress Centre.

Emergent cities and markets of offices in Latin America